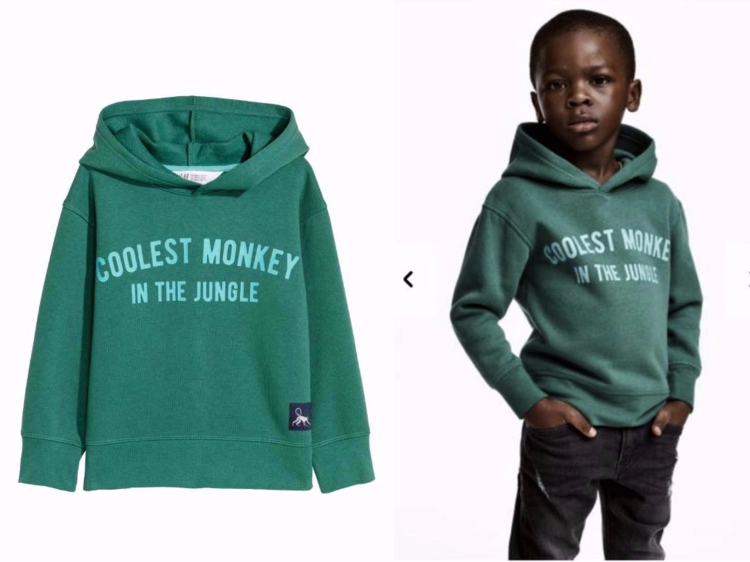 “Coolest Monkey in the jungle” are the words written on an H&M hoodie which went viral and received social media backlash for being “racist”. The outcry was the result of the hoodie being modelled by a black young boy from Sweden. Even though the mother of the H&M model found this hoodie to not be racist, the rest of the world did. Subsequently, H&M issued an apology and pulled the advertisement featuring the boy as well as the product from the market. This paper will draw on the key dilemmas introduced in articles on the hoodie and the reaction from the public. Furthermore, this paper will be a commentary and will look at concepts by Fanon and Steve Biko to argue that this hoodie was indeed racist.

According to de la Rey & Duncan (2003), racism is the institutionalised systematic domination or marginalisation of a specific race by another racial group. This is evident in the introduction of apartheid within the South African context whereby the government enabled white domination overall racial groups in the country which then subsided in 1994 ( (South African History Online, 2017). Within the modern context, De La Rey & Duncan (2003) argue that there has been a rise in symbolic racism which is unlike the traditional racial hostility and discrimination from the Apartheid era. Rather, there has been a rise in symbolic racism as well as subtle [racial] discrimination. De La Rey & Duncan (2003) conceptualise subtle discrimination as discrimination that can either be intentional or unintentional, not visible to the beneficiaries, and difficult to prove. This form of discrimination or racism usually takes form in stereotypes such as in the case of the H&M hoodie. Good!

Hennes & Mauritz is a global fashion brand that started in Västerås, Sweden. Hübinette & Tigervall (2009) argue that Sweden has the image of being the most progressive Western country and is a Third World patron through its progressive transracial and transnational adoption policies. They also point out that there is “strong resistance and reluctance” to talk about race and in Swedish culture and academia and race is a taboo subject within Scandinavian countries. Within the Swedish context, they stand outside of the terrain of colonialism and imperialism, and the experiences of segregation such as the Nazi’s Holocaust.  This is in contrast with the majority of the world as most countries have experienced some sort of racially oppressive history.

People of colour for decades have faced a series of dehumanisation from the West and the word monkey or ape have been part of the popular discourse used to demean them. According to Howard (2014), drawing from simian metaphors and the depiction of Africans as monkeys or apes started between the years 1790 and 1840 as well as the eradication of the slave trade. The portrayal of Africans as simians was the first attempt to portray Africans as less than European humans(Goff, Eberhardt, Williams, & Jackson, 2008). Subsequently, for years going forward the simian trope was used to justify racial naturalism or in other words a colour-blind society with the rise of Obama as president of the United States of America. However, for years this comparison of non-whites to animals was found to justify racist violence as this colourblindness or ‘racial disappearance’ plays out violently for black as it dehumanised them. As a consequence,  this is why the use of a black model to model the “coolest monkey in the jungle” is racist.

The H&M scandal can be used to highlight the key concepts used by Fanon and Steve Biko. It is important to note that Fanon and Biko were both writing in historical periods such as Colonial and Apartheid, respectively. However, as argued by Hook (2004) post-colonial society has inherited the problems of the colonial past and this Fanon’s theories still inform the post-colonial periods.  Colonialism, similarly to Apartheid, is the forceful appropriation, dispossession and control of non-Western territories, whilst imperialism is the theoretical and ideologies that justify colonialism (Hook, 2004; Said, 1978). Unlike most countries like Algeria which Fanon spoke, Sweden was devoid of this. Fanon argued that things need to be looked at in conjunction with the broader historical, social, political, and social contexts as these factors are tied in with the individual’s subjectivity.

Within the social and historical context of Sweden, the word “monkey” is not associated with the simian tropes which have been used as means to demean, dehumanise and exclude African people.

Bulhan (1985) defines violence as any condition by which a group violates the integrity of another person or group. In this case, H&M violated the integrity of non-white individuals all over the world. When H&M released the image of the black model with ‘monkey’ inscribed hoodie, they received negative backlash from celebrities and political leaders such as EFF’s Julius Malema except for the mother of the boy who wore the hoody, BBC online (2018) reported.

The BBC article outlined the outrage from all over the world which made the hoodie go viral. For black people, the picture of the boy wearing the hoodie reminded them of their place in their world and how the term monkey had been used negatively against them and essentially their lived experience of marginalisation and oppression by white people. This is argued by Hook (2004) to be political consciousness which is the “awareness of how one is crucially part of the world and its conditions, and of how one can and should attempt to change the world on the basis of a carefully considered political project.  This political consciousness aggravated the EFF party to loot H&M stores in protest.

“We are not going to allow anyone to use the colour of our skin to humiliate us, to exclude us,” an EFF leader exclaimed in response to why they looted the stores. Furthermore, in another article by Newsweek – for Stephanie Yeboah, this image reminded her of an incident where she was called a monkey in efforts to humiliate and dehumanise her (Silva, 2018). In another article by TheUndefeated, the writer expresses how the image in itself prompted rage from her at first glance as she saw it as antiblack because it reminded her of the simian trope that has been used for centuries(Scruggs, 2018.)  According to Fanon, this rage and sensitivity to the word “monkey” experienced by these different individuals in different contexts is the process by which black people internalise the prejudices of the white world.

This can be used to show why the black Swedish mother of the model did not see this as racist because of the perceived colour-blind norm in Sweden. The rage can also be seen to demonstrate affective erethism which is the “pathological condition of hypersensitivity which arises in oppressive or colonial environments and which involves both a sense of inferiority and a constant nearness to anger and/or rage” (Hook, 2004). The looting of H&M stores, social media calls for boycotting, and the rage that was directed towards H&M is a clear indicator of how the post-colonial society inherited colonial issues.

H&M is a global fashion company and should be more politically, historically, and culturally aware as mentioned by G-Eazy who was one of the celebrities to cut ties with the brand. It is also important to note that as much as Sweden has an image of colour-blindness, immigrants and people of colour do some experience racism in the country (Hübinette & Tigervall, 2009).  However, they have difficulty talking about it because they are socialised to not talk about racial differences.

As a result, transnational adoptees doubt and try to steer away from labelling their racist encounters as such. One of  Hübinette & Tigervall (2009)’s interviewees mentioned an incident where a fellow Swede chanted ‘damn negro’ amongst other things which left him feeling unsafe. Subsequently, the argument that the hoodie in the Swedish context could not have been racist is flawed on these grounds. Therefore, this can be used to argue that the mother’s response that she saw the hoodie as just a hoodie with word “monkey” to be a ‘safe’ statement that any Swede would make because they come from a social context where racialization is taboo.

Which then begs the question of the intention behind H&M’s use of a black model to wear the hoodie. Let me know your thoughts in the comment section below.

On a more positive note, let’s take a look at how some people decided to turn this moment of rage to something more positive. Instead of sharing the ‘racist’ image, Diddy and LeBron James edited the image to say, “Coolest King of the world” and “King of the world”, respectively (Morgan, 2018). Then they proceeded to write Instagram captions to affirm the boy and to say that they reject the racist image but rather saw a positive image of a “young king,” LeBron exclaimed. Likewise, Diddy went on to say that encouraged other black people to see each other as “royalty” rather than the derogatory term used by H&M. Biko’s Black Consciousness Movement is the call for solidarity amongst black people and the efforts to reverse the years of internalization of negative portrayals of black people and rather replace that with a positive and affirming sense of self (Hook, 2004). Diddy and LeBron managed to do this in their positive response to the racist simian metaphor.

This site uses Akismet to reduce spam. Learn how your comment data is processed.